The Castle of the Marquis d'Auvergne, 5 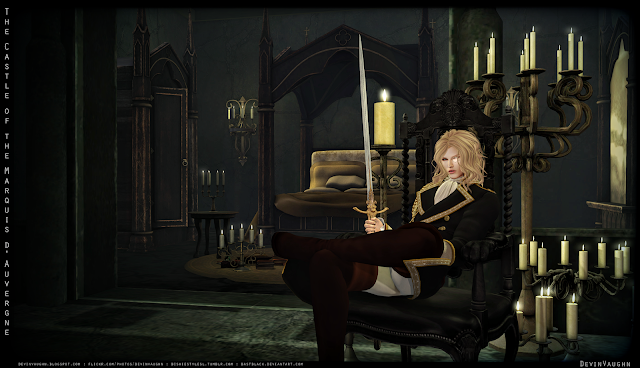 (click to enlarge)
STORYLINE: “You know too much to live," the rockstar's hand reached through the iron bars. His long fingers wrapped around his guide's throat. "Why risk confronting me this way? You could have accepted my offer and lived out the rest of your days a very wealthy man.” The old man’s heart thundered in his ears. His whole life he was in fear that one day he too would fall under the curse. "I needed to know," he whispered, hoping his voice sounded stronger than he felt, "The paintings in the castle...," It was getting harder for him to breath. "You are him, The Lion." The rockstar snarled and tightened his grip. "Wait!" the old man gasped. "Nanette, ...had a daughter." The rockstar's eyes flickered blue in confusion, his grip relaxed slightly. "The child was illegitimate. Your father gave the castle to Nanette, it was her child's birthright." The Lion stumbled backwards as if he had been punched. The old man caught his breath and continued, "I'm your great great grandson. And this," he whipped out his wallet and quickly flipped to a picture of a little boy who looked remarkably similar to The Lion. "Your family survives, just as this castle survives." The Lion snatched the picture and stared at it. A small tear of blood dropped down on it's glossy surface. "You are an exceptionally brave man, Monsieur Gustave." The Lion looked up once more at his host. This time wonder replaced malice in his eyes. His fingers traced the wrinkles on the old man's face that could easily have been his if he were mortal. Gustave breathed a little easier. Satisfied he was safe now, he unlocked the cell door. The Lion burst out, and pulled him into a tight embrace. "Thank you for telling me the truth."

Death Row's mainstore is under construction with a whole new look and layout. Right now you can shop for 50% refund on all your purchases. Also, retired gachaes have returned for a LIMITED time and are playable once more at the new store location (gachas like: gods of egypt, creature legs, circus, motel, geekmania, etc) Head over and check it out: Death Row Designs New Store. Also from Death Row, shown above are many of the excellent items from the Mystic Bastion gacha, you can find here. Right now it's semi-retired but could return at a future date.   Last Ride has had three excellent limited edition outfits for men, two shown on this post. I love them! Be sure to watch the fun Last Ride flickr for news of any upcoming limited edition creations.   Readers of the blog know I am a whore for thigh boots, and these LastStar ones are awesome. They are a new mesh version of the old popular prim ones. It comes with male and female, and is tintable, without or without the top flap. Awesome.   The Bastet chair is the rare from the Pixicat Bast gacha. It comes with a hud to change the color to white, black, pink or red. You can still play it at the Pixicat mainstore.   And lastly, the Bluebeard sword by Kalopsia is perfect for this image. It comes in clean or bloody, and when you touch it, you can choose one of 3 poses. 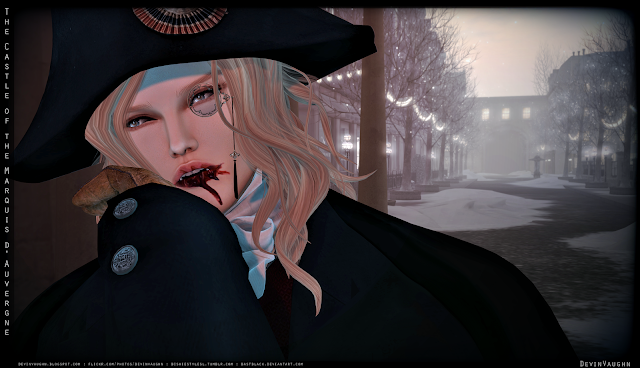 (click to enlarge)
Shown above is the wonderfully detailed new mesh AIR monocle,  Aria. It comes in either gold or silver. Both are mod, and come in right side or left side. Also, you can edit the hanging string for best position on poses. The Revolution Hat is from the Deadwool gacha. The cape is the Joffery gacha from Stitched. It works perfectly with the Regency outfit by Last Ride for a more early 1800s look. Right now their store is renovating but should be up soon. From Swagga is the also handy Leather Gloves that fit the The Mesh Project male body. Have you looked at just how beautiful this new skin, Tox, is for The Mesh Project head? I love the eyebrows and subtle shading on the nose and lips. But for this image, I used the bloody lips by Ghost'Ink. I hid the eyelashes on the TheMeshHead head and replaced them with the Gaeline mesh eyelashes. This allows me to have upper only lashes, and tint them a color other than default brown. I used the gradient texture so the tips are blond and roots brown/black. The Gaeline hud is very easy to use, so it not very hard to use the mesh lashes. This picture was taken at the beautiful new Paris Je T'aime sim. Don't miss it!