Destroyer of the Red Leaf Tribe 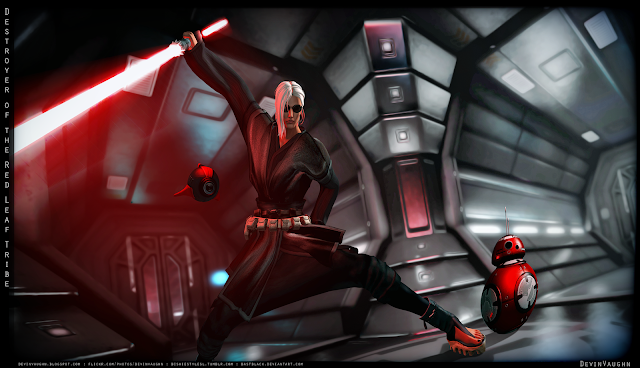 (click to enlarge)
STORYLINE: Amemph was a rogue Sith. His mission was clear; search the galaxy for force users and exterminate them. Light or dark didn't matter to him. The loyalty of a force user was as fickle as the wind. One moment full of grace, the next consumed in hate. He killed them all, and the wombs that birthed them. He was despised by both the Empire and Rebellion for his "righteous" cause, but no one hated Amemph more then he hated himself. By ridding the galaxy of threats like him, he hoped to somehow achieve redemption, albeit one covered in blood.

Star Wars..., I love it so much, and the Fantasy Gacha too. Well guess what? Going on right now are these two awesome things combined! Don't die too hard, grab your Ls and hit those machines for all the Star Wars goodies such as the rare Aphotic PC-420 droid shown above. It comes with a hud to change its color and marking. The little guy makes a lot of cute beeps, turns his head, and will roll next you when you walk.  The Equinox light sabers are so badass with cool sound effects, and works with combat meters. Shown above is the rare Dual Blade. (You can see a gif image of Akira and me fighting it out below. Head to her The Force this one has post for more information on her outfit.)   By Nerdology are the Droid Pals pets. The Star Knight outfit is by !gO!. And the Startrooper belt is by Mushilu.   Items not at FGC, are the goggles and pants by Yasum. The Capri pants fit under the gO! Star Knight tunic and vest and worked perfectly with the TMP body. By the way, going on right now is a massive sale for the Yasum's anniversary with everything is on sale for 50L!    From .Shi are the excellent Bob knot hair and Centurion sandals.