The Rise of Sugar Sugar 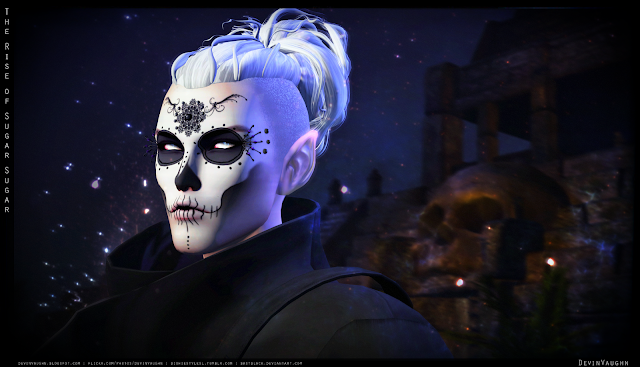 (click to enlarge)
STORYLINE: Clan Noche lord from Mexico, Sugar Sugar, could let nothing foil his massive Day of the Dead celebration. He had gathered to himself likeminded Children of Noche. In fact, the most ancient of their kind was coming thanks to the superb tracking skills of Viuda Negra. There would be only one chance to convince Kaiser Kruel to found a colony in the Americas. Unlike the other human cities who were all now refusing to grant asylum to the newly homeless denizens of Cursed, things would be different in the New World. There would be no refugee crisis. The people of Central and South America had a long tradition of blood offerings and human sacrifice. It was based on an ancient belief life was stolen from the gods. To appease these angry gods, life needed to be offered back. It was perfect. These beliefs Clan Noche could exploit to their advantage. It was time to revive the old Blood God cult.


Are you guys excited or what? Halloween is almost here, and the next after is Day of the Dead. This Halloween the Sugar Skulls in SL have become are very popular. Shown above is the gorgeous Sugar Skull applier for the TheMeshProject head by Tableau Vivant. You can choose from 3 possible styles. The makeup is a full face applier, so wear the TV skin Tone 1 to match it. Also by Tableau Vivant is the Knot hair on sale at We <3 Roleplay. Added even more fun detail to the face, is the Spider Goddess eyelashes by Astralia. It's a gacha from the Nightmare Event and should be moving to the mainstore location soon. The cool piercing that match with the artwork so nicely are the Sanvean Facial Piercing by Haus of Darcy. The Deadshine eyes by IKON are on sale right now 33% off until Oct 31st. It's part of a fantasy eyes sale just in time for Halloween. From Gabriel on sale at the Mens Department is the Side zip jacket and message bag. The jacket comes in two versions, ones with arms tucked into the pockets, and one in normal arm sleeves. Pretty cool. In the background is the badass Dark Temple Sim Prefab by Pandemonium. It uses a combination of prim and mesh and has materials. You can go check out the demo at the Pandemonium sim. ...I hope you all liked my sweeping storyline for Halloween. You can head over the Dark Phantom blog for the Varita Verde Witch's point of view on Sugar Sugar's ambitions. lol Happy Halloween and Day of the Dead gang!