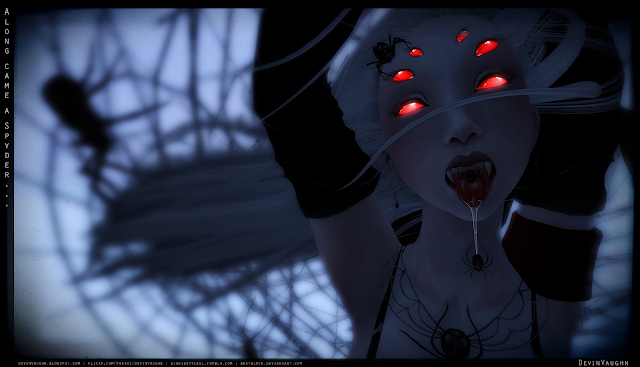 (click to enlarge)
STORYLINE: For centuries the Spyder Clan interbred to strengthen their unique web weaving espionage powers. Viuda Negra, the daughter of Viscount and Viscountess Spyder, was the first Spyder born with white hair. Her power was the pinnacle of Spyder prowesses, but it came with a terrible price, four extra eyes.

Oh the things of nightmares. Are you scared of Spiders? Perhaps heights or clowns? Don't miss The Nightmare Event! This year it's expanded by adding a huge marketplace of awesome, more scary rooms to explore, and 25 pumpkins to find for  free gifts from the merchants. I love the haunted surrealistic landing area, its so creepy and cool. ...From the event shown above is the Aii Arachnia mesh head. It comes with mouth open and closed, 9 eye colors, 10 system skintones, and appliers for TMP and Belleza. The head is mod so you can drop your own skin texture on it, or head over the Omega store to pick up an Omega applier for the head. Sweet! Also by Aii is the creepy tongue with spiders, love the drool effect. The spider on the face is a free gift from Nightmares by the Doll House. Other spider theme goodies are the Caught by the Spider jewerly set by Lost Junction, and spider's web by Uncertain Smile. The windblow hair is by Tableau Vivant, and mesh gloves are by Boom. 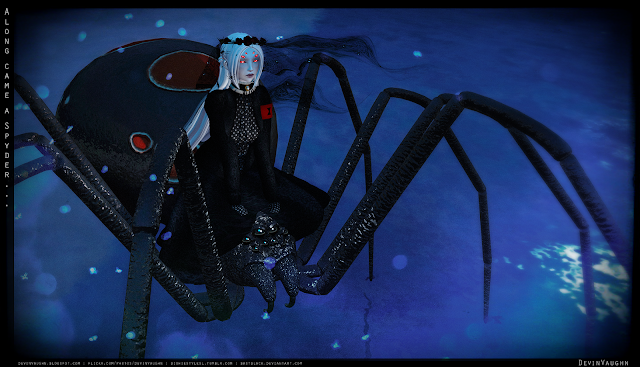 (click to enlarge)
STORYLINE: There's nothing a teenage girl wants more than to fit in. Viuda was no exception. Fear gripped her heart as the new leader of the Vampire Nation, Maximilian Spyder enacted his first decree, the destruction of Cursed. "For too long we have been imprisoned in this cursed land, this penal colony of Darks. No more!" he roared to thunderous applause. "Go now, return to your families, your homes, your lives so cruelly snatched away from you. You are free at last!" She watched silently from the shores of a foreign beach as the only home she ever knew, the only place where she had been truly accepted, sunk below the waves in eerie blue flames.

This spider by Ravenghost is fantastic! It moves like a real spider! So creepy cool! When you wear it, you can choose between 2 poses, riding or walking. When jumping the spider will animate, and when crouching down it will raise its legs for an attack and make a scary sound! I love this spider. He's the rare at the Wayward Halloween event. Also from Wayward, is the Faida Vanessa dress. This one is the rare and it comes with hud to change the front colors. And because I'm having so much fun with this spider theme stuff, I added the Moon Amore La viuda Veil from the Lost and Found event. By Ayashi is the Irime hair with works great with the spider mesh face. Adding a bit more Black Widow style is the Antique Collar by Theater Chain. You can play the machine at mini RMK Gothic, (btw RMK Halloween 2015 is going on now!)