The Sunset Run of Fenni the Frail 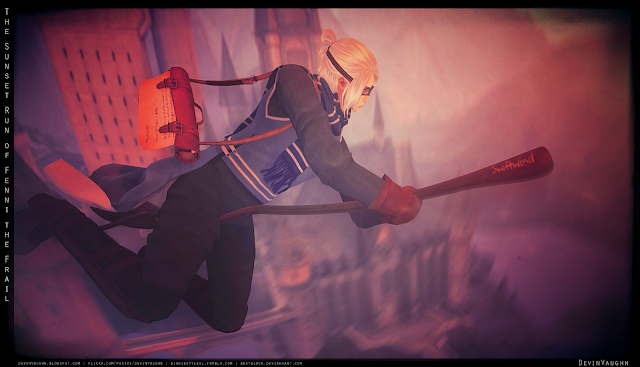 (click to enlarge)
STORYLINE: Fennimore was tired of being picked on. He knew how to defend against the Dark Arts, he just wasn't fast enough to deflect. His girlfriend from Hufflepuff suggested he try out for the Ravenclaw Quidditch team. "It will do you good, Fenni. Help improve your reflexes." Grudgingly "Frail" Fenni accepted the Quidditch team's challenge: Deliver a scroll before the sun sets. Of course it's never that easy, the members of the team would do everything possible to distract, throw him, lead him astray, or trap him, whatever it took to stop his Sunset Run. "On our mark..." Fennimore put on his goggles. "...Set"  He tightened his grip on the broom. "... GO!"

The delightful Wizarding Faire has returned to the Mischief Managed RP sim and it's bigger then ever. There are products and gachas to tickle your magical whimsies. Shown above is the new FATEplay Quidditch team outfit for Ravenclaw. You can even get it in blue and silver, or by-the-book blue and yellow. The outfit includes cape, pants, shinpads, sweater, and a flyable broom. It comes in male, female, and child sizes. BUT that's not all! For the first time I have seen in SL is animating clothing! The cape will begin to flap when you fly. (Check out the gif animation of it below.) To the outfit I added the FATEplay dueling gloves. They come with a hud to change the texture, and open or close the hands. Also from FATEplay is the Evans Ravenclaw scarf. It comes in male, female, and multiple draped positions. A fun gacha item from the faire is the Strike-It Scroll Case bag.  From the Men Only Monthly is a brand new cool hair from Ayashi, Ryo. It comes in Hiro head with expressions from Genesis Labs. It's FREE! It comes with two skin tones, elf ears, 3 eyes, and multiple facial expressions. Just head over to the Genesis Labs mainstore and pick it up. Have fun shopping and exploring the beautiful Mischief Managed sim, the Wizarding Faire ends soon! ....Oh, and one more thing, Apple Fall has a FREE Mandrake gift in their booth.