Birth of a Reaper, 2 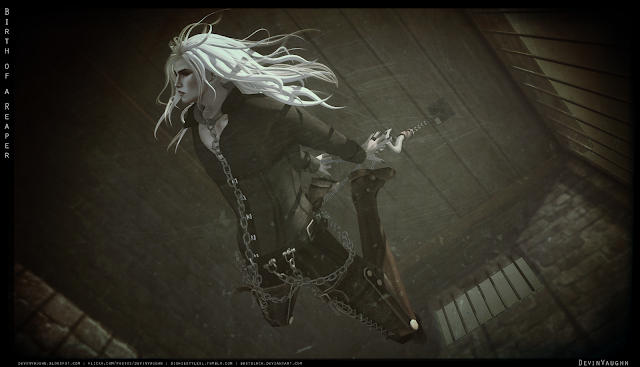 (click to enlarge)
STORYLINE: It all began with a confession. The young Dr. Oliver Conray confessed to his priest he wished for someone to die. "My child, it is sin to wish ill on another, especially from a healer of the sick, however it is human to have such thoughts in a moment of weakness. If you ask for God's forgiveness it shall be forgiven." "No," Oliver continued, "you don't understand. She did die." The good doctor was driven mad by this tragic incident. He developed an obsession with death. He frightened his friends and family with claims he could kill with a mere thought. He gave up his practice and stayed away from all people for fear he might kill again. They found him at home one day in a pool of blood. He had cut off his own legs. He claimed it was offering to Death to undo his crime. He was soon committed to Blessed Virgin's Home for the Mentally Insane.

Have you been to ROMP yet? Today is the last day to scoop up the many tantalizing goodies at sale prices. There is a lot of nice things for the guys. Above is the Salt and Pepper corset with shirt for guys. You can get it without the corset, and it had a hud to change the shirt color, corset color, metal, and piping. It comes in male and female. Also from ROMP, is the Cuffed Ring by CLAVv, and Chains set by Swagga. The pose, shackles, and ceiling hook are by Rack Poses. The hook has seven cool poses in it. To trigger the particle chains that connect to the hook, first wear the shackles and then hop on the hook to pose. The jail cell by N4RS is also on sale at ROMP. It's 9 LI, texture changes on the walls, comes with props, and comes with single and adult poses for MM and MF. ... From the Wayward Carnival is this beautiful Pure skin by Fallen Gods. It comes with appliers for Slink, TheMeshProject, Omega, Soul Uniear, and Lotus. The legs by Contraption you can get at The Mens Department. One of my favorite hairs is Urei by Argrace. I can't get enough of hairs with nice movement in them. The nails are By Snow. By Snow has moved to a new location but you can get the new link below in my style card. And thanks to Akira for the help on the hook pose!