Birth of a Reaper, 3 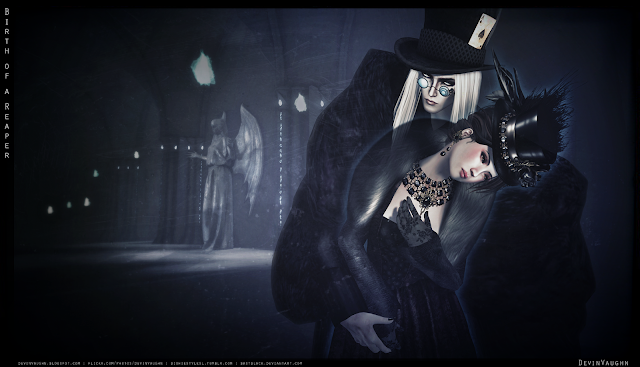 (click to enlarge)
STORYLINE: No one knew exactly how Dr Oliver Conray escaped. It was no surprise they only half-heartedly searched for him, since they were glad his ominous presence was gone. The janitor on the nightshift however claimed to have seen the whole thing, but since she was elderly no one listened to her. She said a ghost lady in fancy clothes came to see the doctor. She could barely hear their conversation, picking up only bits and pieces. The lady was had been a former patient. She apologized for not telling him she was terminally ill. It was the real reason she rejected his marriage proposal. Without another word, she released the doctor from his bonds. Waiting for them outside was a ghostly carriage pulled by a team of spectral horses. A dark hooded driver helped her inside. For a moment the doctor stood there as if he was uncertain what to do, then he climbed in the carriage behind her. He hasn't been seen since.

So many awesome things going on this July, even two events to escape the sun's rays. lol. Genre's Underworld theme, and a Tattered Page's - Good Omens. I loved this book! It's so awesome. I highly recommend you pick it up. Shown above is the dress for prophetess Agnes by Senzafine. It's richly textured in browns and blacks and was perfect for my lady in the Reaper series. From the Underworld theme of this month's Genre, is the awesome Vampire Queen Statue by Entity. Don't walk, run go pick this up! I love it! Adding a spooky charm is the Spirit Flames by Papermoon. They come in several color, 1 li, and hover up and down. Another fun item I picked up is the Eclipse Noir long coat by Vengeful Threads. The hair I am wearing by Tableau Vivant is available at Hair Fair. TV is debuting new hair textures at the Fair, and I love the shine on them. It's so hard to find white hair that doesn't look flat, and the new TV textures definitely do whites well. The hat by Harm's Way can texture change on the hat band, feather, and card. The gacha goodies I used in image are the Luxurious Fur Coat by Curio Obscura, The Tinkerer's Glasses secret prize from Contraption's first music box gacha, the fur stole by Junbug, and the Victorian Gothic rose hat and Crystal cross jewelry set by Devious Minds. If you love DM's jewelry as much as I do, don't miss the badass necklace on sale there at Genre too, it drapes over the back. For both the Ghost Lady and the Doctor, I am using Ikon eyes, and the Fallen Gods Pure Ivory skins from Wayward Carnival. ...It might surprise you guys to know I am playing both characters in this picture. They both really show my aesthetic nicely. I love how this turned out. The Hades and Persephone myth (and it's many forms), is my kind of story.