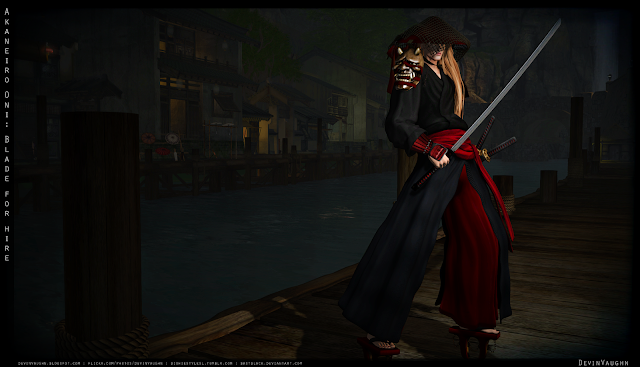 (click to enlarge)
STORYLINE: Akaneiro was an Oni gone rogue, a hired muscle. He was known for being a capable Ronin, but few of the dwellers in the village realized what he was hiding under his hat, his tale-tell Oni horns.

I have a treat for you guys today, a fantastic sim I discovered! Soyokaze is a role playing sim that's beautifully made in the Edo Japan period. They locals are friendly (unless you draw a sword like I did for this picture. Drawing a sword is seen as invitation to get into a fight. lol) There is a cool interactive game on this sim, The Code of the Bushido. Some quests are puzzles, some require a 2nd person, and one of them requires skills and practice to pass. I recommend it for all fans of games in SL.

Before you head to the sim to explore and play, you will need to dress for the part. Above I am wearing an awesome new creation by Swagga, Ronin's Soul. It's one piece fitted mesh and it includes the top, pants, belt, two sheathed katana, and a water bottle. It's on sale now at We <3 Role Play. The Oni pauldron, bracers are an excellent new gacha by Pucca Firecaster. Touch the armor to resize it and it will also deliver to you a texture change hud.  All parts can be resized in the edit menu. The hat is another gacha item, but this one is by 22769 bauwerk. It was from a past Secret Affair, and sadly looks like it's no longer available. (I couldn't find it at the main store location.) The geta are by CerberusXing, and I added a fun tint to them. They can work with either slink or TMP feet, they not rigged and editable. For fun, I added the deep red nail polish by Senzafina. It's just one hud and it will add color to both hands and feet at the same time. 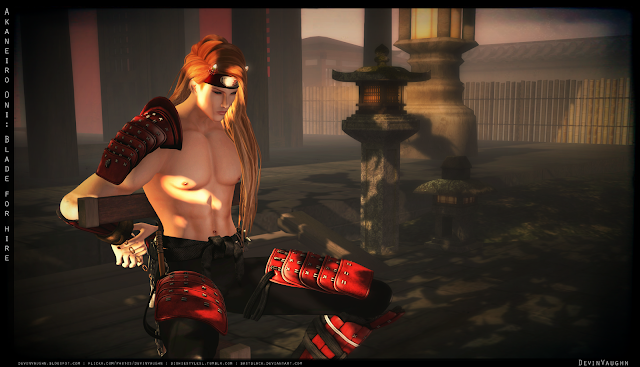 (click to enlarge)
STORYLINE: It was not his lack of skill or Oni magic that got him captured, it was bad intel on how heavily fortified his objective was. Still, he made an oath to return to the Sacred Oni Lands once he escaped. He sensed the Oni had lost too much power. The humans had grown too bold. They no longer feared creatures such as him. He decided it was better to die in a last stand among his brothers and sisters then to suffer the humiliation of being captured by humans again.

The last weekend ROMP sale is upon us. You have until Monday 12 pm sl to run scoop up the deals. Show above is the Roawenwood Sleek Bondage Bar. It has 13 bondage style poses for adults, and it gives mesh manacles for the captured to wear. The chains are a particle effect so be sure to have particles enabled to see them. It's 5 land impact. Head to the ROMP website for links to all items on sale. After this weekend, ROMP will become a large quarterly event that will add some spice to your Summer, Fall, Winter, and Spring.