Richard the Lionheart must die, part 1 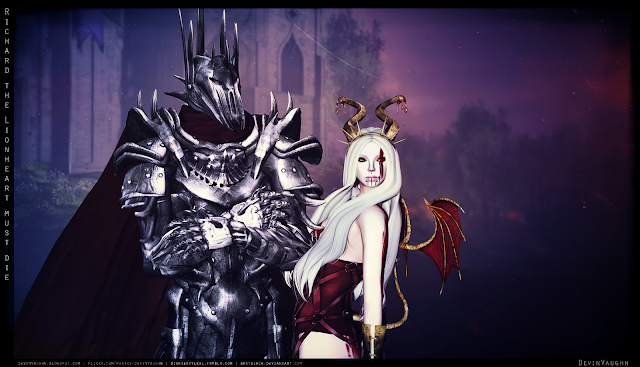 (click to enlarge)
STORYLINE: The rage boiled in the Black Knight. He was only a shell, an entity haunting a suit of armor. He did not require food or water as sustenance. What he needed was war and death; he fed off of it. But now his existence was being threatened. Richard the Lionheart was drawing up a peace treaty that could prevent decades of war. This could not be allowed. He immediately summoned his ally, the Sorceress, and together they plotted against the King.

The Arcade normally doesn't have many objects of desire for the guys, but this round this is entire gacha for the guys by Death Row! It has 20 clothing and accessory items in Medieval, Punk, Post Apocalypse, Cowboy, Steampunk, Hipster, Gothic, and the rare armor shown above, Dark Forces. The armor has a base avatar that includes the head, arms, torso, legs and feet. The chest and shoulder armor are separate attachments, so you can wear those with other outfits if you want. The neck area is very thin so I added the Valentine Cloak by Aii for a knight's cape. The armor can be worn by either the girls or the guys since its an full avatar.

Aarya teamed up with me once more and we came up with this story idea for a mini series. She is showing an object of desire for the girls from The Arcade, the Pixicat dark corset rare. From We <3 Role Play, she is wearing the adorable Little Imp wings and tail by Souzou Eien. The background is actually the castle at The Fantasy Gacha which is also still going on until 14th.