(click to enlarge)
STORYLINE: On Mars, androids made dangerous repairs, ran the businesses, and even kept lonely miners company. Among them was a security drone who became self-aware. There was a vicious legal battle over her in the courts, but it finally ended when she was granted full citizenship and human rights. The miners, who had less status then her, whispered conspiracy theories that her master, the Mars Lord of the North, had secretly paid the judge a bribe. In their opinion, she should have been dismantled as an dangerous rogue AI. But she herself did not care about legal matters, she was consumed with her own inner battles such as the horror of realizing she looked just like every other female security drone. She wanted to be an individual. She wanted to express her inner self. She was not Security Bot 10004872B! She was "Katt."

The new security version of the CMFF Androids include a human textured face. The mesh includes materials so when you turn on advanced lighting, you see your android is a little dinged up then you thought! You can wear your own eyes with it. But if you want to wear your own shape too, just edit the depth, width, and size of your eyes to line up with the android eye-sockets. You can wear either the torso (head, chest, and arms), or the legs (hip, leg, foot). This open up possibilities for your styling. For Fulli's female bot, we gave her a "human" touch. She's like a teenage girl. She loves cats and wants to be cute, so we dressed her up with that in mind. The orbit skirt by Schadenfreude at Collabor88 worked perfectly with android mesh, and we matched the Astro bracelets with it. (The bracelets are still out for you to buy if you missed it Friday.) Her space cat helmet is by Katat0nik. Her adorable cord tail is by Rab Labs. Her hair by Red Mint fits perfectly under the helmet. Polishing off her look, is the kawaii Visor by Papermoon. (Sadly, I was not able to photograph the glow stars that show on the visor, but they are cute and match with the stars on the helmet.)  I am wearing the ManDroid Security Enforcer by CMFF. Hey, he's a serious dude. Don't even think about sneaking into Biodynamics, he'll catch you. lol 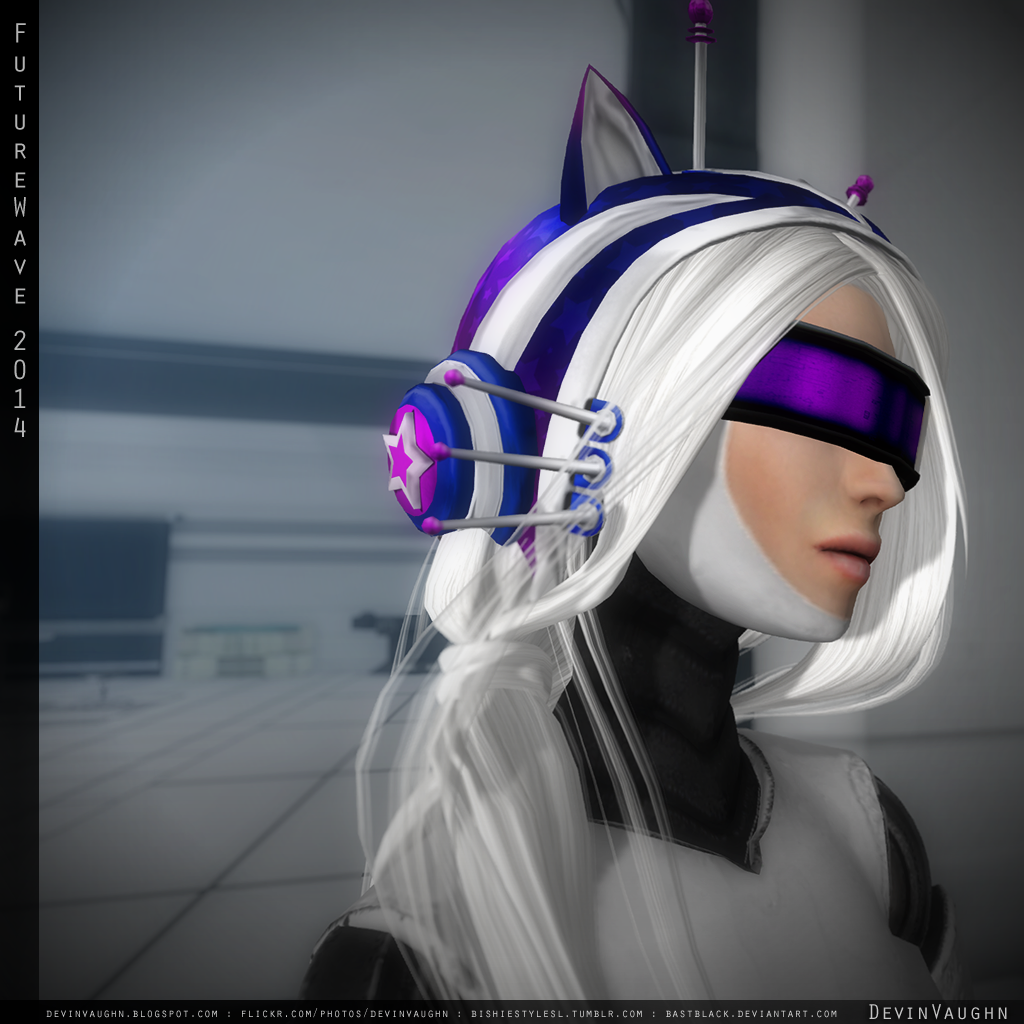 Location:
Insilico Mars
Thanks for your help Fulli!