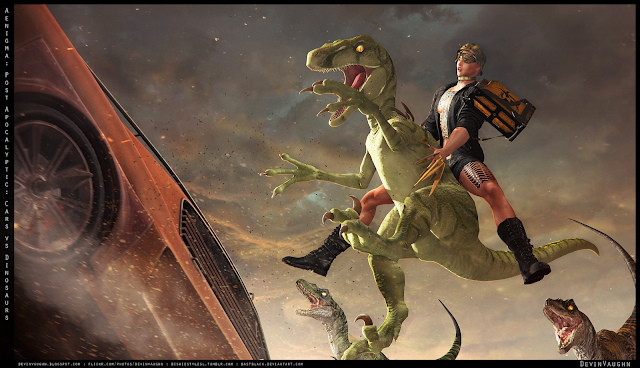 (click to enlarge)
STORYLINE: 20 years ago, when Lars was a kid watching dinosaur movies and happily munching on popcorn, he never imagined how different the world would become. It wasn't just the climate that returned to the Hothouse Earth, but the giant reptilian rulers of that era were back too. So here he was, all grown up, in Antarctica, sweating his ass off, while barely hanging onto a raging Velociraptor as it attacked an old muscle car. What a time to be alive, right? Humanity was at war with itself over the last remaining land safe to live on. He was on team Harmony, and the others... well, let's just say they and their gas guzzling cars were in denial. There was no way to turn back time.

You just know I had to do Jurassic World, right? This post was inspired by cinphul gascan, Black Cat Velociraptor & poses at Aenigma's current Post Apocalyptic round, and the freebie Prehistorica Animesh Raptors at SL17B. Don't miss either of these great events!