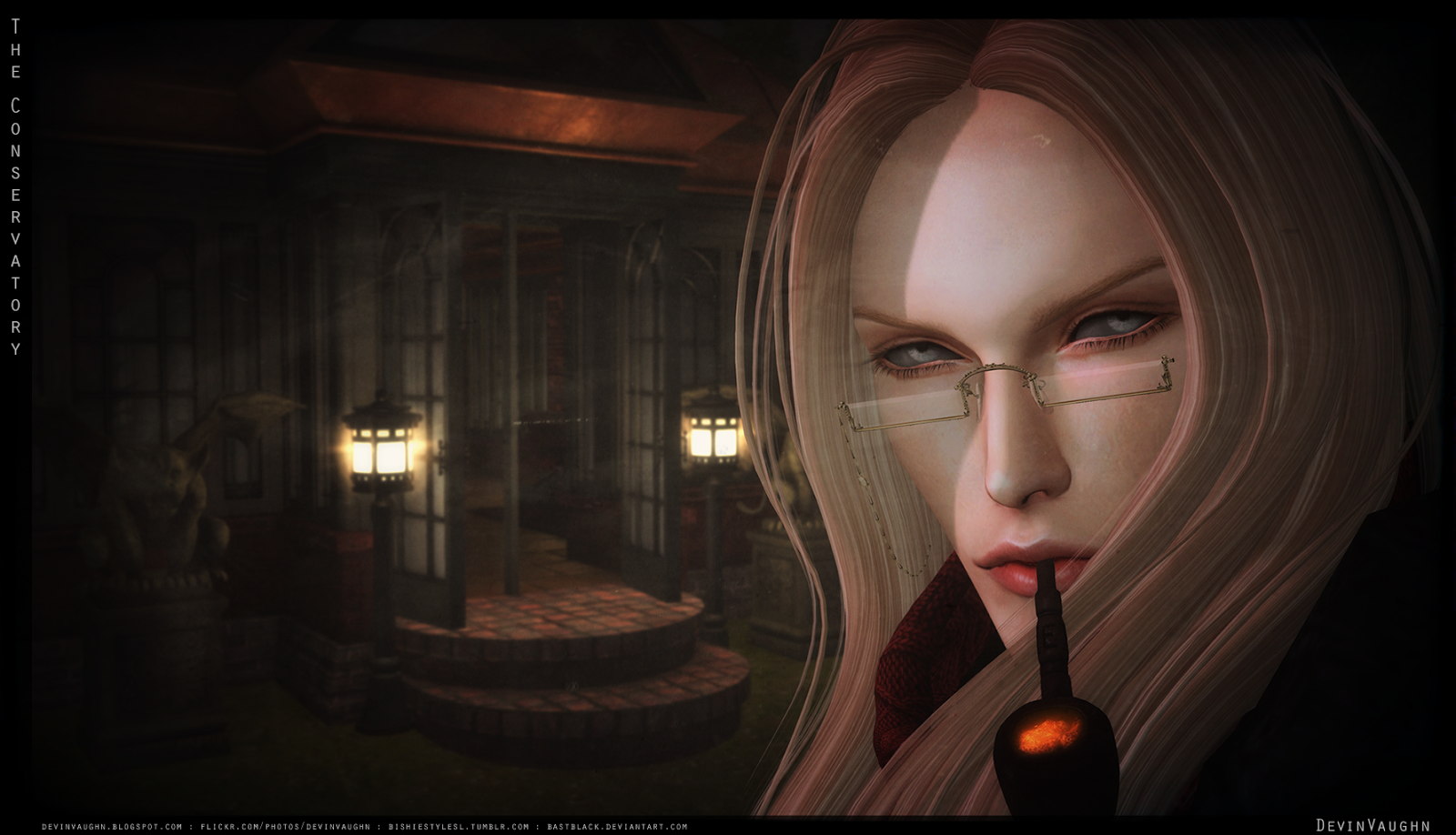 (click to enlarge)
STORYLINE: On his way to rendezvous with Lady Edelweiss, the Black Baron became suspicious he was being followed.

The outside of the Trompe Loeil Iona Conservatory at night with the street lights is just phenomenal. The materials and lighting work together to create awesome depth like the shiny copper roof, and sheen to the tile floor. I added scaled up Noctis paperweight Gargoyles out front. They're from the from the Gothmas Tree and Gargoyle set. Inside I created a lush plant grouping with a fountain I hacked. The serene looking mermaid has been replaced by a gargoyle spitting out blood. Hey, a blood fountain is way cooler. lol ...But you may be looking at this fancy guy. He's wearing the beautifully detailed Richelieu gold glasses by AIR. They come with chain either the left or right side, and a resize script. The pipe is a group gift by Epia. Hair is a new release by Tableau Vivant available at the main store. And the warm red Aran Knit sweater is a Men Only Hunt hunt prize by ::K::. It comes in male and female, with under shirt and without out. The head is the new TheMeshProject Anime head, it's perfect for villainous bishounen styles! (I will make a separate post about it to tell you more if time allows.) (click to enlarge)
STORYLINE: After an enjoyable evening with Lady Edelweiss, The Black Baron got down to business. Shipments of Royal Blood were being attacked by a criminal gang calling themselves The Wrath of Horus. The disruptions of the blood supply were unforgivable. He reviewed the latest military gadgets, such as the biplane bomber, and drew up a battle plan to ambush the crooks. Unknown to him, a raven listened closely to his plans, then silently disappeared up into the night sky.

The cozy Mission Armchair set by Artisan Fantasy comes in either warm or dark wood. It has 2 solo unisex animations, 4 female, 4 male, 5 cuddles, 3 adore, and 5 adult. The ottoman has 4 solo animations, 5 adult, and 6 punishment. To the left is the Roawenwood Sleek Bondage chair. It comes in either light or dark, with RLV or non-RLV, and 18 animations. On top of the ottoman is the Biplane RARE from the NOMAD diesel punk gacha at OMG Gacha. When you touch the radio controller, the plane will take off and fly and then drop temp rez bombs before landing. Fun. The London Map by Never Totatally Dead is from the Jack Ripper inspired From Hell gacha. The lamp and rug are part of the Noctis Baron Von Scarlet Soft and table set.