Engine Room: Revenge of the Machines 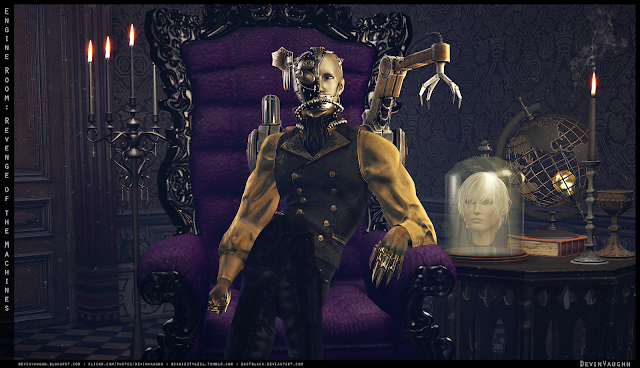 (click to enlarge)
STORYLINE: The Black Baron had spent years developing a wondrous steam powered android. But tragedy struck when he was paralyzed in a Zeppelin crash. He planned to remove the android head and attach his own to the golden mechanical body. However learning of his plan, the "wondrous creation" had other ideas and loped his master's head off first.

On the last day of the Engine Room, Contraption dropped an awesome new item, the Thibaut Waistcoat for 25% off. I only discovered the sale late night and tried to get this posted to alert you guys. If you missed it, don't worry, it will be at mainstore now. Fortunately, in my rush to get this image is out, actually had a set ready to go. Lucky turn of events! (It was an idea I had while my computer was down.) Here are some badass items from the 2nd round of Engine Room. The next round will be in September.

This amazing robot head is by Wicca Originals, it comes in sizes for men and women and robust texture hud to change out its many textures zones. The Ear gramophone comes with it and is separate from the head. On the table is the Skeletal Globe Lamp by Schadenfreude. It comes in several base texture, and includes light options.