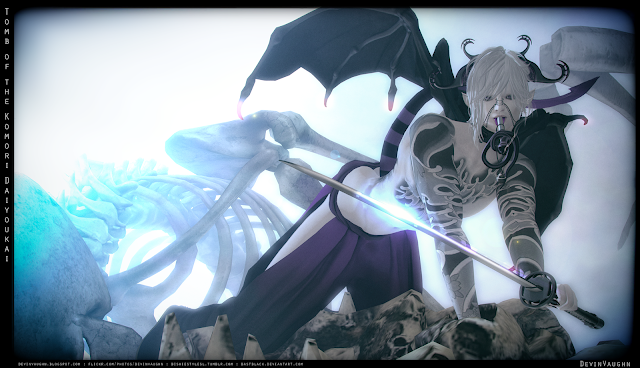 (click to enlarge)
STORYLINE: He inhaled deeply the smoke of the serpent pipe. As he exhaled, the snake at the tip hissed out smoke trails. He watched it lazily meander towards a nearby rockface. The pipe was a prized relic of the Kōmori clan. It was not of this world, it belonged to the spiritworld. It's smoke was being sucked toward a heavy spiritual presence nearby. There must be hidden cave. "Father," he smiled. "At last I found you." Once inside the cave, he discovered the massive fallen skeleton of his father, its batwings still stretched out, as if he might fly away at any moment. Beside it impaled in a pile of skulls, was the gleaming legendary katana of his father. Smoke swirled around it. The pulsing power emanating from the sword gave him goosebumps. He climbed up the pile of bones and lovingly withdrew his birthright. "Nightfang" he whispered to it as it were his lover, "So nice to meet you at last."

The idea of this post was inspired by one of my favorite animes.  The pipe, tattoo, hairsticks, and pants you can find at Japonica. The Bento wings are part of the brand new Linden Labs Bento starter avatars, and the bento tail is by Murder of Ravens. The giant skeleton is part of the Cureless gacha at Epiphany.

For more information on Japonica, go to: https://baroquedevent.wixsite.com/japonica