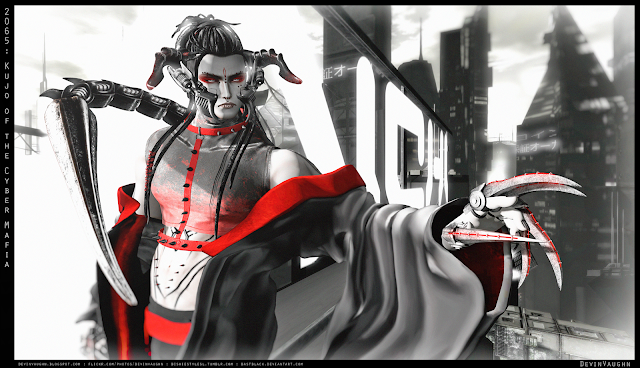 (click to enlarge)
STORYLINE: High above the busy streets of Insilico, a man's laughter rang out from the most plush penthouse of the city. Kujo, ringleader of the Cyber Mafia, was plugged into an expensive VR gaming rig. A silent android watched him in the otherwise empty room as he twisted and dodged attacks from some unseen enemy. "Hey, Gertie," he yelled a little too loudly, "I haven't had this much fun since I was a little shit in the global games tourney." The android nodded politely. "Superior technique, Master. No one will suspect the mighty EVA is piloted by a human this time." The droid turned to look at the flickering security monitors from her master's overhyped Death Match: Battle Bot EVA vs a bona-fide Creature of the Night. No one thought the vampire would win, it looked like it was starved to death. Interest in the fight was remarkably high. Perhaps because it was so rare to see a living Nosferatu. They were thought extinct long ago. She looked at the massive number of bets pouring in from the net. "Everything is proceeding to plan. EVA is heavily favored to win." Kujo laughed, "I think its time EVA stumbled, don't you?" He faked a trip. Gertie watched silently as the vampire took advantage. It made quick work of Eva, then leapt into the screaming crowd to begin feasting on them. Gertie turned away from the carnage. Was it wise to let that... thing, live? Wait. She turned to the haloscreen of the VIP viewing boxes. Fights were breaking out. "Master look!" she pointed. They both saw it at the same time. The display case of Kujo's most prized possession, the Yata no Kagami, was shattered as a gambler tossed a loan shark into the display. Kujo quickly unhooked himself from the rig. Fury blazed in his cybernetically enhanced eyes, "Ready my copter, NOW!"

Japonica is back, and this time its wearing a little something special to spice up your nights. Head over to Re:Japonica to see what I mean. Scandalous goodies to have for girls, guys, homes, and decor. Have fun!