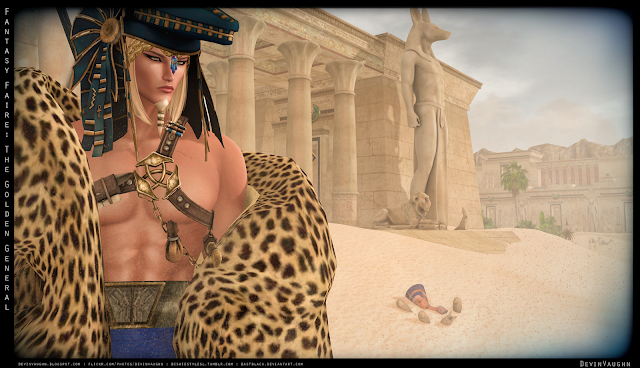 (click to enlarge)
STORYLINE: As surely as the Nile flooded each year, Horemheb was certain he was destined for greatness. He was born with gold hair and eyes. The faithful of the Two Lands took his golden features as a sign, for they believed the gods had skin of gold. Horemheb ascended quickly up the ranks of the army as a skilled warrior and strategist. However when he reached the pinnacle of his career, General of Pharaoh's army, chaos struck. The Heretic King denounced all the Gods of Egypt and declared the Sun the one true god. Enraged, Horemheb stormed into the darkest depths of the Holy of Holies. It was sacrilege for anyone to enter except the high priest. Horemheb was not afraid. He demanded the gods intervene immediately. A chill blew into the chamber. From the mist a mysterious voice whispered, "If you strike down King Akhenaten, Queen Nefertiti, and all the Children of the Sun.... a new nation will be born from you, the Children of the Moon." Horemheb smiled. He thought the God had blessed him and his secret plan to take matters into his own hands. Afterall, with all the royals and their followers eliminated, he would be next in line for the throne. He could restore the old religion. However the voice had not issued a blessing, it was a dire warning his cruel ambitions would invoke a terrible curse.

Today is the last day of the Fantasy Faire, and I'm please to bring you a theme dear to my heart, Ancient Egypt. Fallen Gods has created the Golden Delta sim at Fantasy Faire. It's wonderful to explore and watch the boats sail out. While you are there, don't miss MeadowWorks awesome Egypt gacha, the rare is Nefertiti! Over at WasabiPills is the Cleo mesh hair for girls. Its mod so I reshaped it for a better fit. From Empyrean Forge is the wonderful Emissary's Rook. It comes in male and female fit, and is availible in black, silver, or brown. From OtherSkin is the cool Prophecy chin beard. ... Ok, I have to run. ....Have fun at Fantasy Faire!