The Castle of the Marquis d'Auvergne, 3 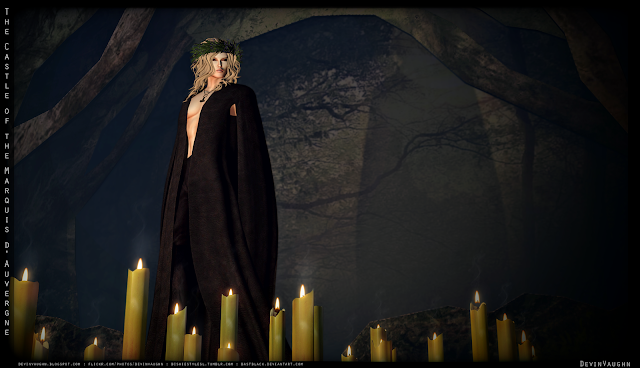 (click to enlarge)
STORYLINE: "This castle holds many secrets." The old man pushed a wooden wall panel. It groaned, then gave way revealing a hidden passage. The smell of mold and earth wafted up. "Come," the old man turned on his flashlight, "there is something I want to show you." The rockstar silently followed behind. Each step down seemed to descend deeper into the past. "The tale begins 1795 during the Reign of Terror. The blood of aristocrats dripped from the guillotines onto streets of Paris. Misery was everywhere. The Castle of the Marquis d'Auvergne was no exception." The old man guided them into a dungeon room containing a small quaint theater. "Here is the true treasure of the Lion. It wasn't gold or jewels," he gently padded the crumbling painted wood props. The rockstar jumped up on the stage and kicked the bones of a long dead rat out of his way in disgust. "The Lion was youngest son of the Marquis. He had no prospects in life. His family was finically ruined. It was expected the indebted castle itself would soon also be lost. The Lion created this stage himself after a failed attempt to runaway and join an acting troop. By day he hunting game for a living, and down here by night he did his heart's desire. In fact, this tiny theater is how the Lion met my great great grandmother Nanette. Fascinating, isn't it?"

The Secret Affair event is going on now with a theme of winter. From the event is the Luxurious Cape by Stitched has these awesome long sleeves that can be worn or hidden for a sleevesless look with a hud. Also at Secret Affair is the Thor necklace set and Eindride wreath by Plastik. The Wreath comes in all seasons, and a hud to change textures. The pants and boots by TURB work perfectly with the cape, they are from the rogue gacha. The Forest set is from the Studios gacha by Death Row, and the candles are part of the Abandoned Piano set by Noctis.