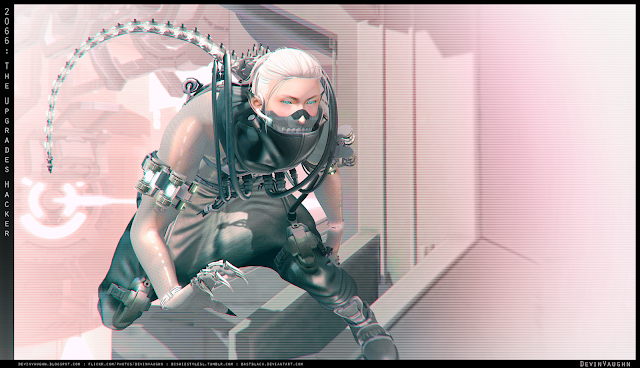 (click to enlarge)
STORYLINE: He leapt under the bowls of the glimmering white city in the sky. The place was the private playground of the Mars Tycoons, those who grew fabulously rich off their genetically engineered slave labor force toiling in the dangerous mines below. He was not strong enough to undo this social injustice. However, he could relieve those-who-had-too-much of their great "burden," and share the ill-gotten loot with those who needed it the most. Each time he stole a priceless Upgrade, he grew better capable of stealing more. It would be only be a matter of time before his fat-cat prey would notice the thievery, and then the real games would begin.

Introducing a brand new subscription box for lovers of all things Cyber, is UPGRADE. The box contains 6 exclusive original items in a Sci-Fi theme. The preorder reduced price at 1000L. After the box's release, that you can purchase it for 1500L from the marketplace here until August 31st, 2019, after which it will be retired: Upgrades subscription box.

From the box is the super cool Jammer Spine by Contraption. Its Animesh! You will need to make sure your viewer is current to see it correctly. It attaches to the back and has a hud to change several different zones various colors. Also you can pose the tail or control what type of animation it plays.  Also shown from UPGRADES is are the cuffs by Astara. They come in several colors and have a hud to change it's displayed text. The Outfit is from the Elysion gacha by Gabriel. The headset and armbands are from the GRPE gacha by SOLE. The android eye are By Snow and have a nice hud to change its colors in several zones. Face mask by Krova. Bodysuit applier is by Graves. Bento Talons by Contraption. And I love this hair by No Match too. This has been a great summer for Cyber lovers. I'm looking forward to the next UPGRADES themed box in August!