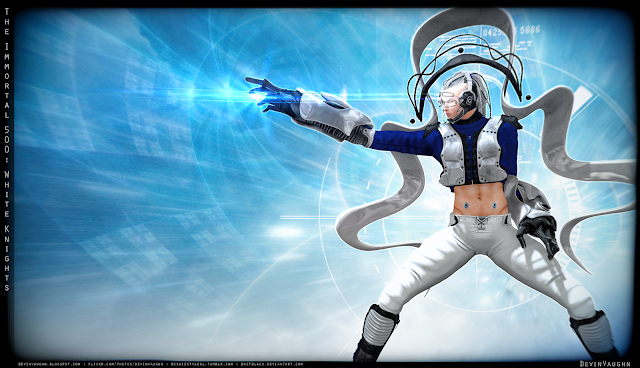 (click to enlarge)
STORYLINE: The Immortal 500 race was looming. According to tradition, the victor from the pervious year determined the rules for the next race. Excited rumors spread throughout the fractured Vampire Nation. Would the deposed tyrant and winner from last year, Kaiser Kruel, reemerge from the shadows to deliver his decree? He had been missing for some time. Anticipation and speculation for the event had reached a fever pitch when like the master showman, Kaiser returned to loud applause. He announced himself as leader of the newly formed United Americas. The crowd gasped. A new Nation? Kaiser was clearly enjoying himself. "All forms of transportation will be banished in the 2066 race. The race instead will be a relay. Hand to hand combat will be legal, and," he paused for dramatic effect, "...greatly encouraged." Representing his United Americas, was team White Knight. Their team leader was the infamous C.U.R.S.E.D Angel. who ripped a Battle Bot apart, limb by limb, with his bare-hands.

Are you tired of going to big events and finding nothing for guys, or nothing for girls? Wouldn't it be great to see an event that brings both girls and guys back together? Introducing new event, Epicene! This first round has a wonderful collection of quality new releases for everyone! Shown above is the new Dext hair by A&Y Cyberbunker on sale at Epicene. It comes in male or female, had a hud to change the colors on its many parts, and it also includes a scalp tattoo with TMP, Omega, and system layers.  From Boys to the Bone, is the ingenting crop blue with braille lettering. As with all BTTB wear, it includes a wide range of fits for girls, guys, and femboys too.  Also at Epicere is the Gutchi Galaxy Headphones. They are resizable, and come with a hud to change its textures.  Over at ROMP are they awesome Sporty Boy Pants by Swagga.  This is the American style football pant with padding under it. You can pick them up in white, black, and red. They are fitted nicely for the TMP male. Also by Swagga are the shoulder pads and headgear from gacha Digital Flyboy.  From Cureless is a fun gacha, Synthetic Angels, over at Epiphany. I used the Hale and Gevurah heads.  From the past round of The Gathering is the Nubian Collar by the Forge.  The helmet by Blue Falcon Industries I combined with the other headgear elements. Its mod, so I made the visor more transparent. On the belly are the Bionique implants by Bliensen + Maitai. The Razor Dread boots, are always handy. The skin is by Clef de Peau, and the TMP eyebrow is a gift you can pick up at the Aeros mainstore.

(Update:  You can see part 2 of this storyline at the Dark Phantom blog)