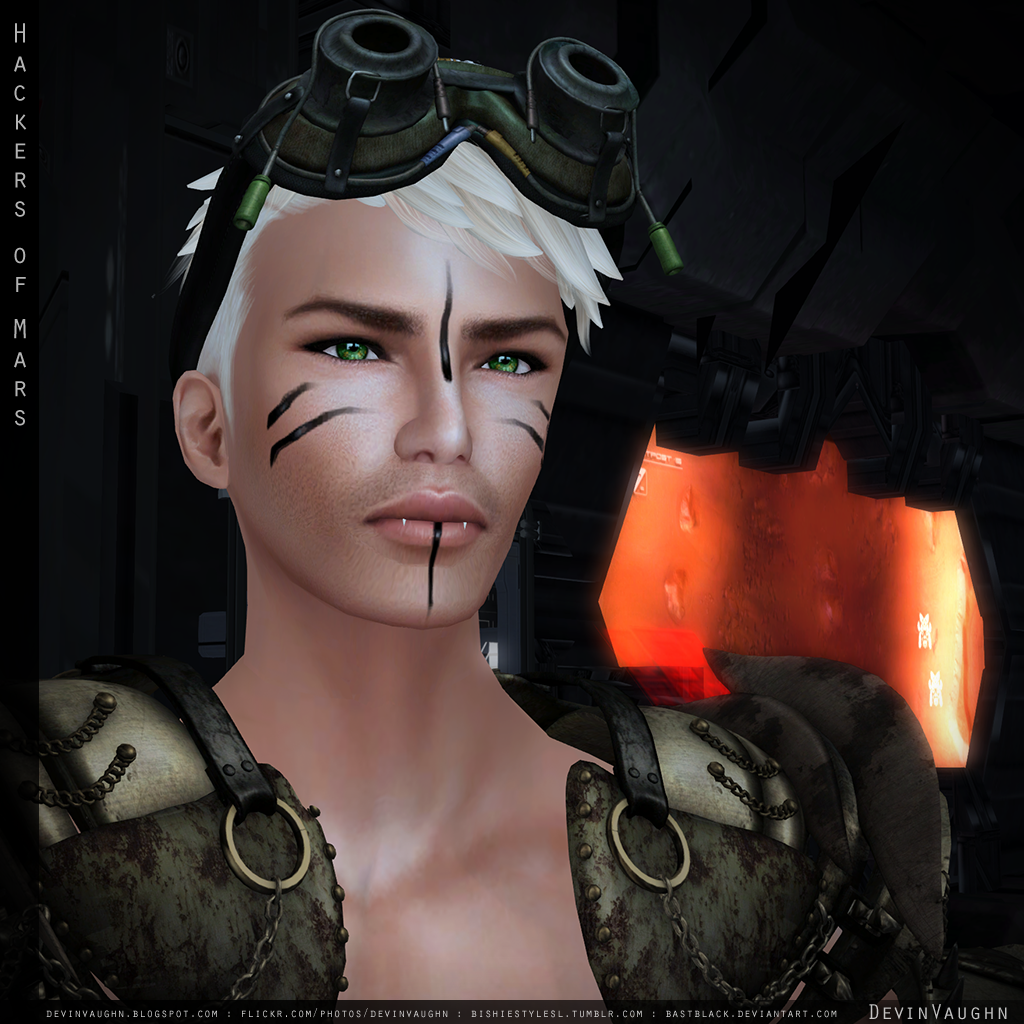 (click to enlarge)
STORYLINE: The Mars colony was a dreadful place. Corporations ruled over all aspects of the colony. Their sole purpose was to create more profit. They even genetically breed their own slave labor force.

At The Men's Department is a fantastic deal from Tableau Vivant. Remember the cool wild colored Damon skins I have shown in the past? Well now you a can get a normal skin color version of the Damon skin for only 300L. And introducing for the first time, Tableau Vivant is adding hair layers for facial scruff, chest hair, and happy trail. I'm wearing the happy trail (see image below). Love it. Having an option like this is great, it adds just a little more pop to a skin. Echoing the trail line, is a cool war paint tattoo from Lovely Disarray. The Tableau Vivant Damon hair is also at Men's Department. I paired it up with my favorite scalp texture by Action. The deep green eyes are a Christmas gift from Poetic Colors. 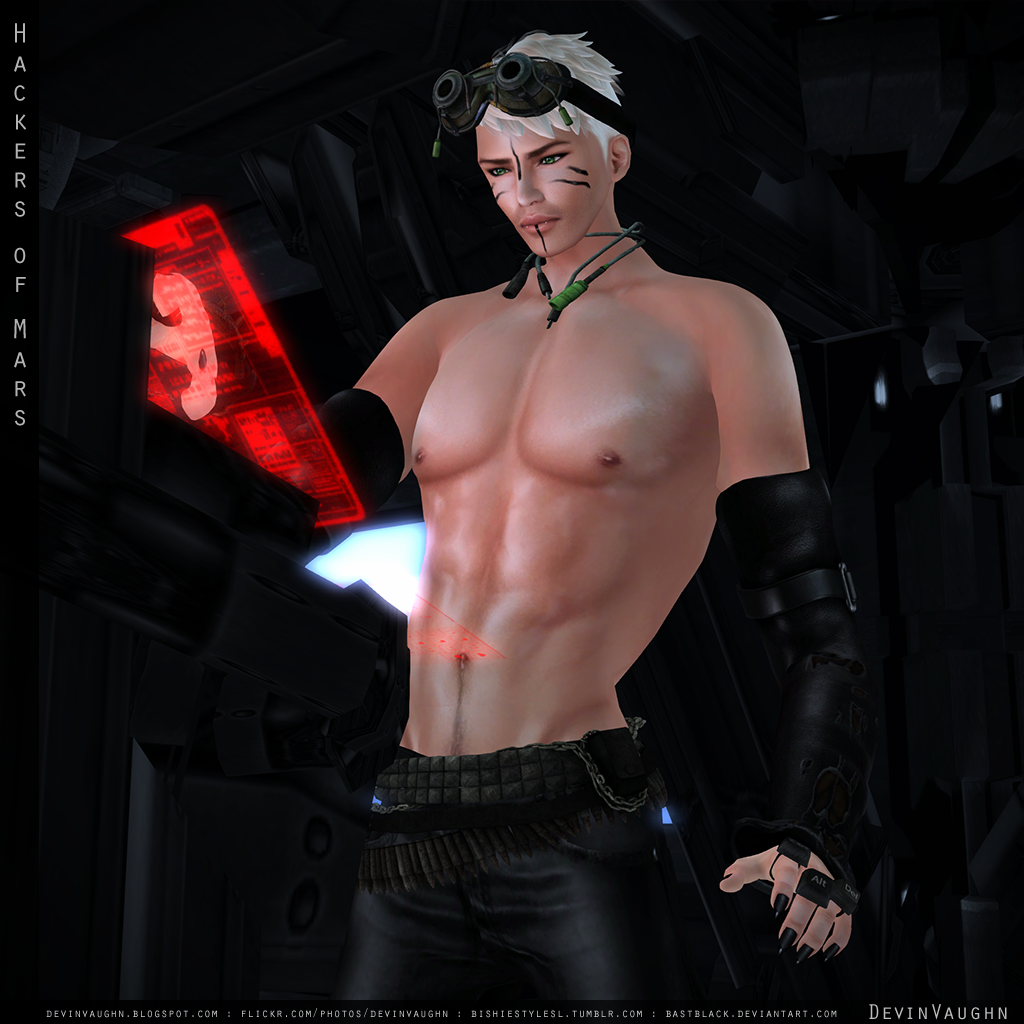 (click to enlarge)
STORYLINE: Hybrids were not considered people. They were property patented by their corporate makers. A Human/Martian hybrid named Static Charge dabbled in hack craft when he was not busy tolling in the mines.

From my bag of tricks, is the NMJ BodyOil tattoo you see me using here to create a sweaty look. The goggles, boots, and rings are part of Death Row's Post Apocalyptic Nerd series and have fun power cord and floppy disk elements. You can pick them up at FaMESHed. The Male Leather sleeves, also by Death Row, fit great but if you wear Slink you will have some poke on the hand. The Control Alt Delete rings are also made for the default hand, I tried to make work on the Slink hand as best as I could. All Death Row are wonderfully made, textured, and shockingly affordable for original content! Go load up on the coolness! <3 DRD 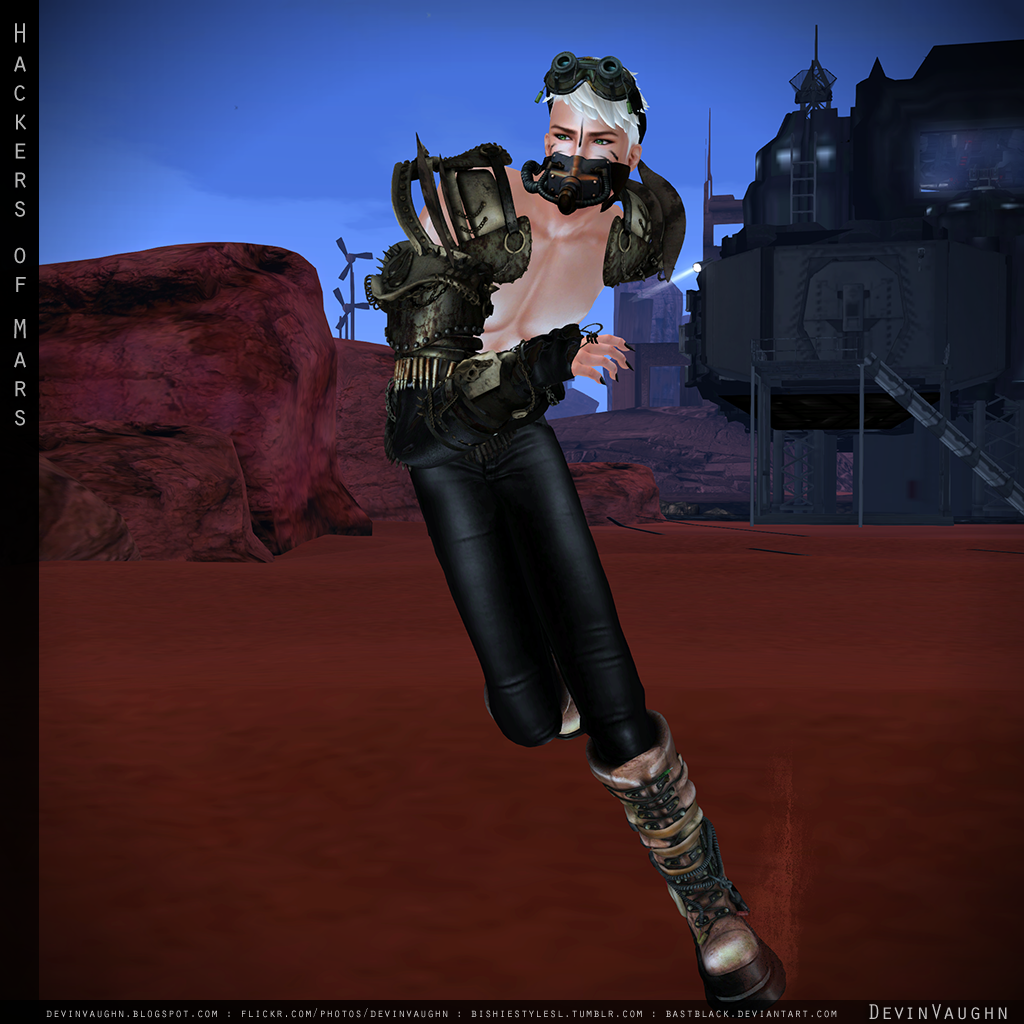 (click to enlarge)
STORYLINE: He discovered a hole in the corporate main server's security and made a break for it.

You guys know I am crazy for boots right? The new Death Row Post Apocalyptic Nerd stomp boots are easily one of my favorites. They're just so fun to look at with details like power cords and ancient floppy disks. For going out into harsh Mars atmosphere, I used the Death Row Tubes mask. It's one of the best mesh gasmasks you can get and I love how this looks on the back of the neck too. (see picture below) Don't be scared off by Death Row's "female" label on this armor either. It's not rigged mesh. You can edit on xyz to scale it up for a good fit. The set comes with shoulder, upper arm, lower arm and hand. The hand piece that comes with it will not fit well with Slink hands. Following Skell's tip, I picked up these great slim fit leather pants for men by Immerschoen Male, and he also send me to check out pose guru momomuller / [3M]. This one of 3M's poses above. 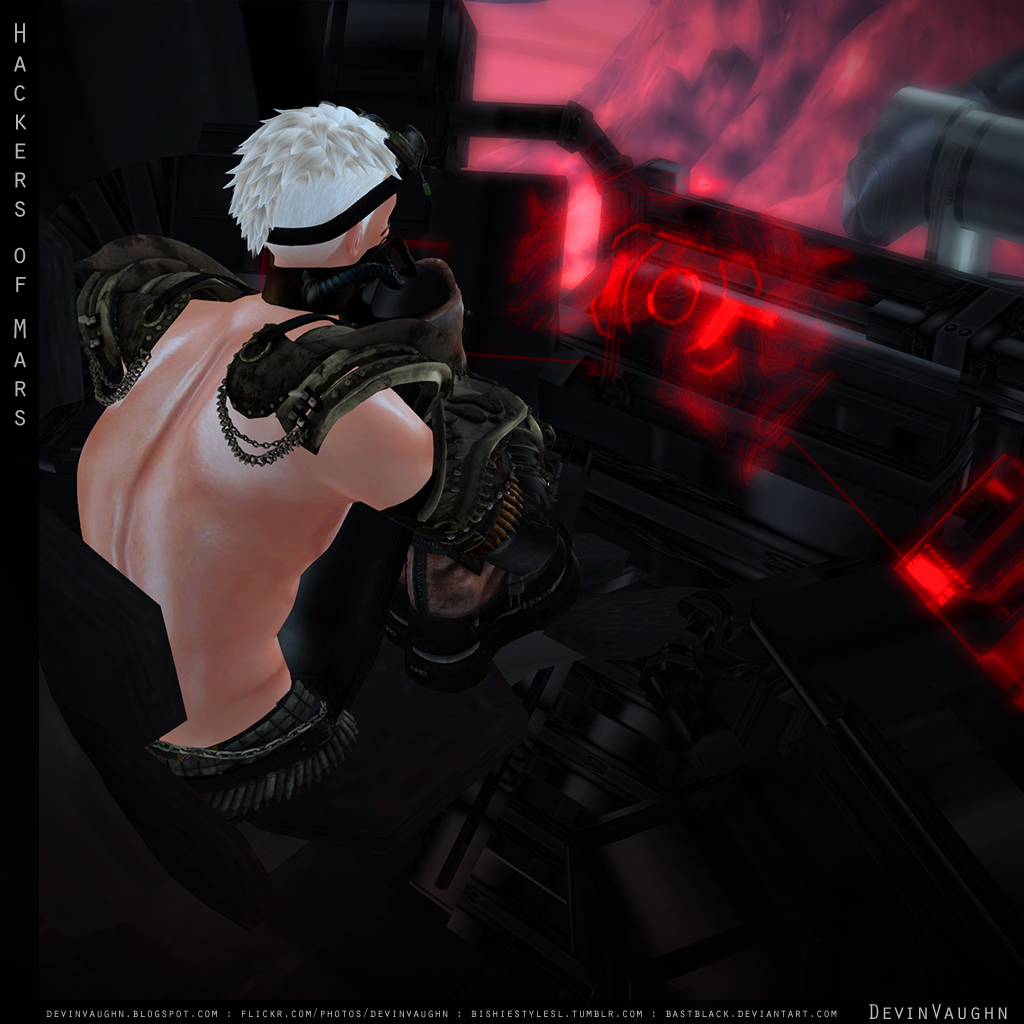 (click to enlarge)
STORYLINE: He successfully snuck onto an automated transport ship that would take him to the alleged, "Sanctuary in the Sky."

If you have never been to the sims of Insilico, you are in for a treat. This is one of my favorite places in SL ever since I first saw it. The Mars section has expanded recently to 2 sim with a colony city, and seems to be growing. Can't wait to see what develops.

For Scifi and CyberPunk fans, get ready for FutureWave. It's brought to you by the Cursed team (World Goth Fair, Clockwork Spiral, Gothmas by Gaslight) and it starts in February. Should be awesome!

On Him, Static Charge:

Location:
Insilico Mars
Posted by Devin Vaughn at 11:20 AM