(click to enlarge)
STORYLINE: After Jack Frost froze the Thames last year, he became a local celebrity. As the date of this year's Frost Fair drew near, his adoring fans staked out the river hoping to get a glimpse of him at work. But Jack prefers the solitude of gentle falling snow to squeals of excited teenagers.

The Glaze of Winter crown by Contraption I added a slight cyan tint to. When you see it with materials on, it looks amazing! The crown comes in 3 sizes, and you edit it how you like. Most of my look here is what I wore last year as Jack, but back then you couldn't see under his blindfold. Now you can to see what Jack really looks like, including my eyelash experiment from last year. These lashes by Gaeline Creations were very fast and easy to adjust using a hud. I really would love to see some mesh lashes solutions for the men. Any designers listening? 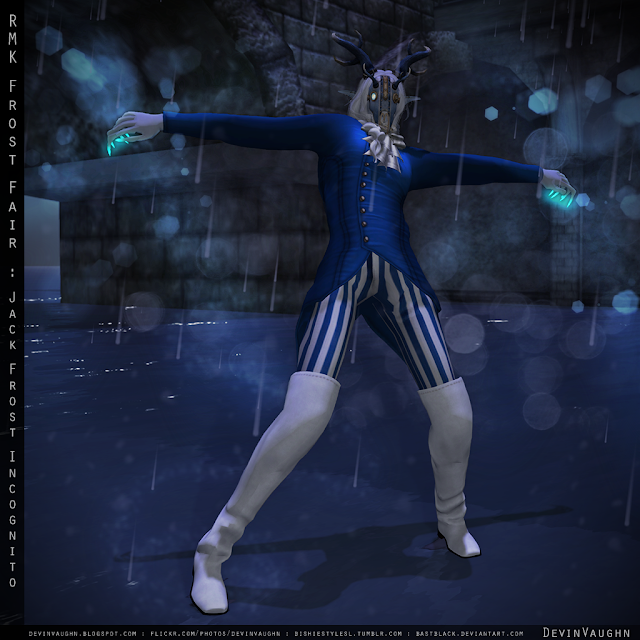 (click to enlarge)
STORYLINE: Jack wore a disguise and snuck past the crowds to freeze the Thames, but didn't fool anyone for long. He was soon over run by seekers of his icy autograph.

Jack caught in the act! It was fun to whip out some special effects in photoshop for this one. The steampunk reindeer mask by Contraption you can pick up at RMK Frost Fair. It's materials enabled and comes with antlers only, mask, mask with antlers, and decoration rez version. While you are the Contraption booth, be sure to pick up the nice freebies too! The outfit is by LOoLOo's is from Gothmas by Gaslight. The pants are system and that works great for my boots. The hair by Wasabi Pills is a lucky iceberg win from a past Arcade.

Location:
RMK Gothic - Thames
Posted by Devin Vaughn at 9:18 AM