I just found out my Zindra Vortex Speed Build Challenge entry for theme "party" is on exhibit at the SecondLife 9th anniversary. My entry is being used to represent the Speed Build because it shows a strong concept can win even if the build itself is simple. I used 2 custom textures and 11 prims. You can only use 70 prims or less, must stay within the build platform space 10m x 10m, and have only 50 minutes to build once given a theme. Builds that have dirty humor, move, or are interactive usually win too. What I also love about speed build is how the winner is chosen. This is the most fair system I have come across in SL. You are voted on by the same peers you just competed against. You can't vote for yourself. You submit a vote for 1st, 2nd, and 3rd place. Speed Build also is great for learning new tricks. Because of my work at Speed Build, I have been hired to build live stage sets for The Rogue, Ellie's, and Beautiful Freaks. Speed Build is a lot of fun, and even a loss is a learning experience. 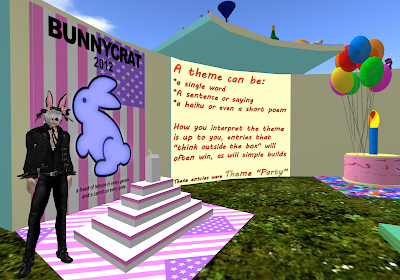 Speed Build theme: Party
My idea: Political Party
Injoke: Politics and elections can be very ugly, so I wanted to do a funny twist on a political party. I have submitted bunnies to Speed Build many times, so it's a long running gag for me. My first Speed Build win as a giant white rabbit. The Bunny logo is similar in feel to the donkey and elephant logos of US political parties. The US flag is altered to more gentle looking Bunny color theme. The podium was inspired by a famous movie poster for Citizen Kane. My slogan is an allude to a famous Herbert Hoover slogan of the 1920s, but altered to a bunny theme:  "A head of lettuce in every garden, and a carrot on every plate."